New Research in the Field of Skin Cancer

A paper published in 2014 by our own Dr. John Ebner dives deep into the complicated communication signals given off by skin cancer, specifically Squamous Cell Carcinoma. This paper is the culmination of the research done by Dr. Ebner while he was training at the Cleveland Clinic Foundation.

The CCAAT/Enhancer Binding Proteins (C/EBPs) are a family of leucine-zipper transcription factors that regulate physiological processes such as energy metabolism, inflammation, cell cycle, and the development and differentiation of several tissues including skin. Recently, a role for C/EBPs in tumor cell proliferation and differentiation has been proposed, but the incomplete characterization in the literature of multiple translational isoforms of these proteins has made interpretation of these roles difficult. Therefore, we have carefully reexamined C/EBP isoform expression in human nonmelanoma skin cancers. C/EBPa, C/EBPb, and C/EBPd were analyzed histologically in squamous cell carcinomas (SCC). The individual isoforms of C/EBPa and C/EBPb were examined by immunofluorescent digital imaging, western blotting and DNA binding activity (electrophoretic mobility shift analysis). Expression of all C/EBP family proteins was decreased in SCC tumors. Suppression was greatest for C/EBPa, less for C/EBPb, and least for C/EBPd. Western analyses confirmed that C/EBPa p42 and p30 isoforms were decreased. For C/EBPb, only the abundant full-length isoform (C/EBPb21, LAP*, 55 kD) was reduced, whereas the smaller isoforms, C/EBPb22 (LAP, 48 kD) and C/EBPb23 (LIP, 20 kD), which are predominantly nuclear, were significantly increased in well- and moderately-differentiated SCC (up to 14-fold for C/EBPb23). These elevations correlated with increases in PCNA, a marker of proliferation. Although C/EBPb displayed increased posttranslational modifications in SCC, phosphorylation of C/EBPb21 (Thr 235) was not altered. C/EBP-specific DNA binding activity in nuclear and whole-cell extracts of cultured cells and tumors was predominantly attributable to C/EBPb. In summary, two short C/EBPb isoforms, C/EBPb22 and C/EBPb23, represent strong candidate markers for epithelial skin malignancy, due to their preferential expression in carcinoma versus normal skin, and their strong correlation with tumor proliferation. 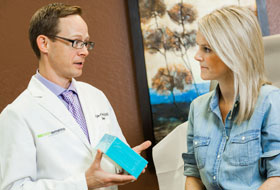 "Considering that an autoimmune disease can take an average of 4 years diagnose, I am thrilled that Dr. Ebner knew immediately what was wrong.  He started treatment and worked with me until we found a solution that works."
- Bonnie S.
READ Patient Stories 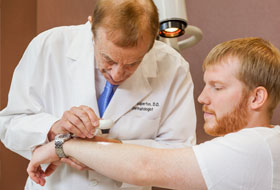 "Doctors found a malignant melanoma on my arm and followed through with the needed surgery. We recommend Arizona Dermatology to all our family and friends."
- Gene A.
READ Patient Stories