Rosacea is a condition that, according to the National Rosacea Society, affects 16 million people a year. And it’s a condition of the skin that we see very frequently in the office.
The signs of rosacea are typically redness, broken blood vessels, and acne-type lesions which mostly occur at the central face. Also, less commonly, there is thickening of the skin of the nose which is known as rhinophyma.

The treatment options are broken down into three aspects. The first aspect is behavioral modification. So, we recommend sunscreen containing zinc oxide, since sun is one of the most common triggers. We also recommend a wide-brimmed hat as well. The second thing I recommend, as far as behavioral modifications, is to keep stress levels to a minimum. And then we also want to avoid spicy foods as well as alcohol intake.

The second aspect of it is medications. So, we use medications that come in topical forms to treat the more mild to moderate cases. And for the more severe cases, we add in an oral medication.
And then the third aspect of the treatment of rosacea is lasers. There are two main types. The first type of laser is a vascular laser and that targets mostly the redness of the rosacea. And the second one is known as a CO2 laser, and that targets that rhinophyma or that thickening of the skin of the nose and that helps to alleviate that. 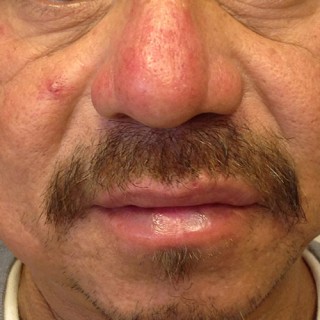 Rosacea on the Nose

Rosacea is a common skin disease that frequently begins as a tendency to flush or blush easily. As rosacea progresses, people often develop persistent redness and acne-like bumps in the center of the face. This redness may gradually spread beyond the nose and cheeks to the forehead and chin. The main symptoms of rosacea include:

Overtime, the symptoms of rosacea tend to become more noticeable. The redness becomes permanent and your skin is more easily irritated by something as simple as water. Research suggests that rosacea tends to run in families who have previously encountered rosacea or severe acne.

Receiving the appropriate dermatological treatment for rosacea helps maintain discomfort, control redness, reduce acne-like breakouts and diminish the reddish purple veins caused by rosacea. Working with Arizona Dermatology to treat rosacea does more than just improve the visible symptoms, but increases your overall quality of life by giving you confidence in your skin.

There are many treatment options for rosacea that we provide at Arizona Dermatology, and we will work with you to find the best option. With all of the treatments we offer, we will educate you on various triggers that can cause rosacea flares and help you to not just treat your symptoms, but work to keep them from returning in the future.

Prescription medications are available as an effective treatment for rosacea. Medications we prescribe often include oral antibiotics with additional anti-inflammatory properties (Oracea, Doxycycline) or topical prescriptions that reduce redness, inflammation or pustules (Mirvaso, Metrogel, Finacea, Avar). This simple, yet effective, treatment for the symptoms of rosacea could be your answer to soothing your unwanted breakouts.

Skin care products are used as a preventative measure to treat the occurrence of rosacea and limit future inflammation caused by sun exposure. Skin care options may include gentle anti-bacterial & anti-inflammatory cleansers (Epionce Lytic Cleanser) or gentle cleansers with active ingredients such as sodium sulfacetamide and sulfur (Sumadan or Avar cleanser). A sunscreen with a SPF of 30 or higher can also reduce the symptoms of rosacea by reducing inflammation. We will work with you to recommend the best skin care products fit for your specific rosacea symptoms.

Redness or flushing associated with rosacea is caused by small, dilated blood vessels near the surface of the skin (telangiectasia). The vascular laser light targets, penetrates, heats and closes the blood vessel, diminishing redness and giving you confidence in your skin.

One of the more common symptoms of rosacea is an enlarged, bulbous nose. Resurfacing laser or electrosurgery can be used to diminish the excess swelling. Heat is used to debulk the nose by removing excess tissue with a laser or high-frequency electric current.