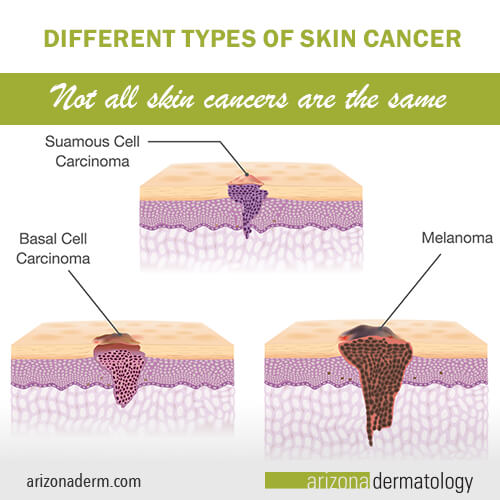 What causes basal cell carcinoma? Basal cell carcinomas develop from abnormalities in the basal cells, round cells located in the lower epidermis. When ultraviolet light from the sun or tanning beds triggers changes in these cells, they begin to reproduce uncontrollably, resulting in a basal cell tumor.

What does a basal cell carcinoma look like? Basal cell carcinomas can look quite different from one person to the other. They may appear as an open sore, a red patch, a pink growth, shiny bump, or a growth with elevated, slightly rolled edges and a central indentation.

Melanoma is the most serious type of skin cancer, however, when detected early, the 5-year survival rate for melanoma is 99%. It is estimated that over 207,000 new cases of melanoma will be diagnosed in the U.S. in 2021.

What causes melanoma? Melanoma develops when ultraviolet exposure causes mutations in the melanocytes (pigment-producing cells) of the skin, resulting in uncontrolled growth. Many people believe that melanomas typically develop from an existing mole, but 70%-80% of melanomas are new growths.

How dangerous is melanoma? Melanoma is considered the most dangerous form of skin cancer because of its ability to quickly spread to other areas of the body if not treated early. It is estimated that over 7,000 people will die of melanoma in 2021.

What does melanoma look like? Melanomas vary from person to person. The best way to screen yourself for melanoma is using the ABCDE criteria, which evaluates the asymmetry, border, color, diameter and evolution of a mole. Look for any new, unusual or changing areas of your skin, both in sun-exposed and sun-protected areas. Be advised: melanoma can show up anywhere, even in places you’d least expect.

How is melanoma treated? Melanoma is typically treated with excision or Mohs surgery and is very curable if caught early. If the melanoma has spread, other options such as immunotherapy, targeted therapy, chemotherapy and radiation may be recommended. Revolutionary advancements in immunotherapy are improving survival rates and quality of life for people with advanced melanoma.

Other, rare skin cancers include: