Everything You Wanted to Know about Warts 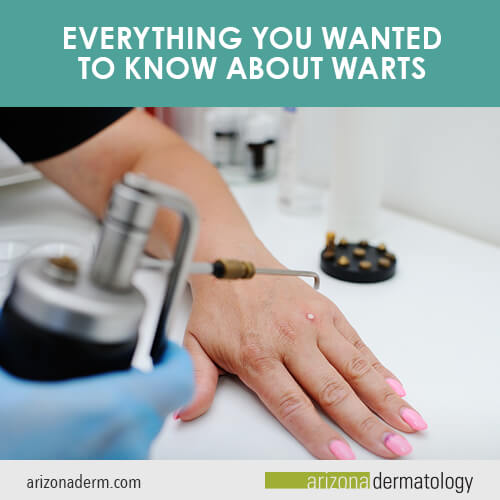 Warts are growths on skin that are the result of infection from the human papillomavirus (HPV). When the virus infects tissue, it causes an overgrowth of cells. There are several different types of warts, and they can be difficult to get rid of. Let’s take a look at types of warts, wart basics, and the best ways to treat them.

Common Warts. These rough, fleshy growths most often occur on the hands. They are flesh-colored, tan, pink or white. Some are spotted with black pinpoints, which are tiny, clotted blood vessels.

Plantar Warts. Plantar warts are warts that appear on the bottom of the foot, usually in weight-bearing areas. Due to the pressure of walking, the warts will typically grow into the skin and appear as rough areas with black pinpoints. Plantar warts can cause discomfort when you walk.

Flat warts. These small, flat, round or oval-shaped growths usually appear in large numbers on the face, backs of the hands, or legs. Most people will get between 20 and 200 at a time. They are most common in children and young adults. They often appear around a break in the skin, such as shaving nicks in men’s beard area or on women’s legs.

Filiform warts. Also called facial warts because they usually appear on the lips or eyelids, filiform warts appear as long, narrow projections growing out from the skin. They can also be commonly found on the neck, fingers or legs. Only a few strains of HPV cause filiform warts.

Genital warts. Genital warts are a common sexually transmitted disease appearing in the tissues of the genital area. They may look like small flesh-colored raised bumps or resemble cauliflower. Genital warts can be so small they are not visible.

How do warts spread?

Warts are highly contagious from skin-to-skin contact. Rubbing, picking or scratching at warts encourages them to spread. You are more at risk of contracting the virus that causes warts if you have a weakened immune system, cuts or breaks in your skin, or if you chew your fingernails or hangnails.

Somes strains of genital warts can cause cancer. Condoms and other forms of contraception do not protect against genital warts. A vaccine exists to prevent the development of cancers caused by HPV.

Adults who suddenly experience outbreaks of warts should see their doctor as this can be a sign of a compromised immune system.

Left alone, most warts will eventually go away on their own, but many people choose to have them treated. Some warts can be treated at home, while others require treatment by a dermatologist. For example, do not try to treat filiform warts on sensitive areas like your eyelids.

Warts can be persistent. Getting treatment from a dermatologist for warts is the quickest, most effective way to get rid of them. Another good reason to have your warts treated by a dermatologist is to ensure that they are, indeed, warts, and not some other skin condition.

Many over-the-counter treatments for warts contain salicylic acid. You’ll soak the wart for five minutes, then remove some of the rough, dead skin cells on the surface before applying the liquid. Do not re-use the cloth or pumice stone you use to rub off the surface of the wart or you risk re-infecting yourself with the HPV virus.

Freezing sprays for warts are also available as over-the-counter wart treatments. The instructions guide the user to spray liquid butane onto the wart, destroying it. You will need to freeze the wart deep enough and for a long enough duration to be effective.

Other home remedies, such as putting duct tape over a wart, have had inconclusive results.

How a dermatologist gets rid of warts

Treatment of warts by a dermatologist will depend on the type, number, and location of the warts. These treatments can get rid of the warts themselves, but not the virus that causes them. New warts may form in the same or different areas.

Cryotherapy. In most cases of common warts, the doctor will freeze the wart right there in the office. The treatment stings a bit, but is well-tolerated.

Cantharidin. The doctor paints a solution on the wart that causes it to blister and die. You’ll need to come back in a week to have the dead wart removed.

Electrosurgery and curettage. The wart is removed with a combination of scraping and burning. This works well for filiform warts and plantar warts.

Excision. The doctor cuts the wart out of the skin.

Chemical peels. Flat warts can be treated with chemical peels that remove skin layer by layer.

Immunotherapy. If warts won’t go away with other treatments, or continue to recur, your doctor may prescribe an immunotherapy. Immunotherapy causes your body’s own immune system to attack the warts.