Freckle vs. Mole: What’s the Difference? 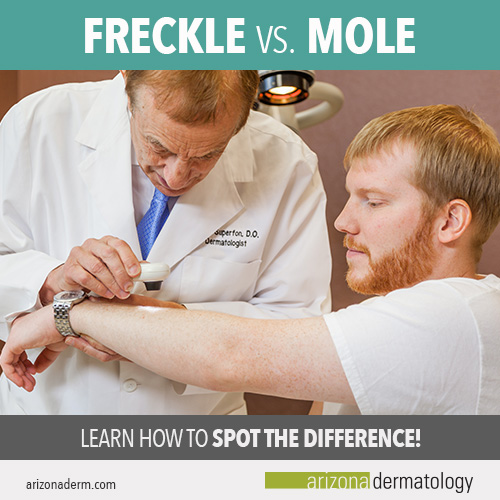 Many of us have freckles and moles on our bodies as a result of genetics or sun exposure. But how can you tell the difference between moles and freckles, and how do you know when to be concerned about them?

First and foremost, it’s important to understand that moles and freckles are common in all individuals. Although some moles have the potential to become cancerous, most of them are nothing to worry about. In fact, the average adult has about 30-40 regular non-cancerous moles on their body. Freckles are found on almost everyone and are benign the vast majority of the time.

In order to comprehend the difference between moles and freckles, it’s important to first understand the biological factors at work to protect your skin from harm, and why these things matter in regards to moles and freckles.

When understanding the physical appearance of your skin, the two most important variables are the two M’s:

Melanin is a pigment found in your skin that not only determines your hair, skin, and nail color, but also protects your skin from the harsh ultraviolet (UV) rays of the sun.

The primary function of melanin is to be your coat of armor. Melanin is produced and distributed in response to sun exposure that comes in contact with the outermost layer of your skin. This is where the melanin absorbs and reflects UV rays while converting sunlight into heat. As melanin is typically dark brown or black in color, an increase in production also causes your skin to darken.

All individuals produce melanin to varying degrees, which is why different skin colors exist and why some people produce freckles more than others.

Melanocytes are the skin cells that produce melanin. They are found in the bottom layer of your skin’s epidermis. Although the majority of individuals share a similar concentration of melanocytes in their skin, there are two aspects of these cells that vary greatly from person to person, due to genetics.

These two important characteristics of melanocytes are:

The activity level of your melanocytes is important because it determines how much melanin you have in your skin. Fairer-skinned individuals produce far less melanin, which means they have less protection from the sun. The opposite goes for individuals with darker skin tones.

Distribution throughout the skin

Now that you have a brief understanding of the role melanin and melanocytes play in protecting your skin, let’s look into what happens when you develop freckles or moles.

Freckles are abnormally concentrated clusters of melanin. When you develop new freckles, it means the melanocyte cells in your skin couldn’t produce enough melanin. This can be due to excessive sun exposure or an uneven distribution of melanocytes which leaves your skin damaged. This damage essentially confuses the melanin pigment, causing the melanin to cluster abnormally on the top layer of your skin. This results in the discolored spots you recognize as freckles.

The main identifiers of a freckle include:

Although all freckles adhere roughly to these characteristics, there are a few different types. Some individuals have simple freckles, medically known as ephelides, that disappear completely in the winter and reappear when summer comes around. This is the most common type of freckles and are often found on those with a lighter complexion.

Moles, on the other hand, are composed of active melanocyte cells that have grown in a cluster as opposed to spreading evenly throughout the skin. Due to their more complex composition, moles are generally wider than freckles and are slightly raised. They can also appear bumpy or rough, and can be abnormally shaped. Since they’re active cells, this means moles have the potential to continue growing into a form of cancer, such as melanoma.

Don’t worry—this doesn’t mean all moles are cancerous. In fact, the majority of them are not. But just to be sure, we recommend keeping an eye on your existing moles to monitor whether they’re rapidly changing in color, size, shape, or height. In addition, watch for the development of any new moles, particularly if you are over the age of 30.

Over 75% of melanoma cases are found in new moles that develop after the age of 30, while the rest are found in existing moles that begin to change significantly over a short period of time. It’s natural for moles to change gradually over several years, but if you’re noticing changes over the course of a few weeks or months, contact your dermatologist immediately.

The American Melanoma Foundation has created the ABCD’s of Melanoma to assist in gauging the severity of your mole and to help you distinguish whether it’s something to be concerned about.
Here’s what to watch out for:

If you notice any of these traits in your mole, any sudden or significant changes, or if you’re unsure about something, see your dermatologist right away to have the mole evaluated by a professional.