How Alcohol Affects Your Skin 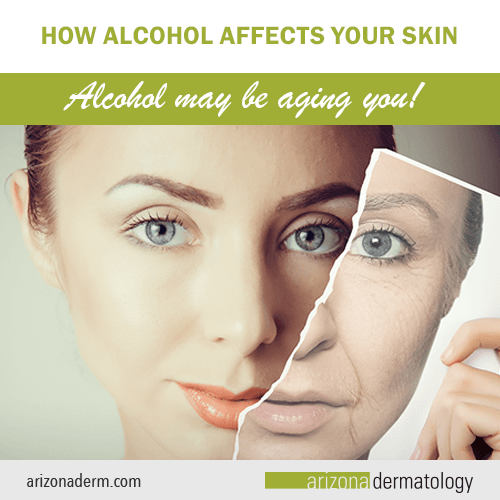 Everyone knows that drinking alcohol can have a negative effect on your liver, but did you realize that those beers, shots or glasses of chardonnay are also taking a toll on your skin? Most people don’t.

Let’s take a closer look at what happens to your skin when you consume alcohol.

Alcohol dries out your skin.

Not only does alcohol act as a diuretic, but it also suppresses the body’s production of the antidiuretic hormone vasopressin, which helps the body hold onto water and limits how much urine your kidneys make. That makes alcohol a double-whammy in the dehydration department.

Inflammatory skin diseases like acne and rosacea can be exacerbated by the consumption of alcohol. Research has shown that people who drink alcohol have elevated levels of the inflammatory marker CRP in their blood. The more they drank, the more their CRP levels increased.

Drinking also dilates blood vessels in the skin, causing facial redness. Over time, these capillaries can burst, causing permanent visible red and purple veins in the face, especially in the cheeks.

Alcohol increases the risk of acne.

In addition to increasing inflammation, over time alcohol consumption can cause oxidative stress and hormone imbalance, both of which are linked to acne in a 2013 study.

Male hormones, called androgens, are a common cause of acne in both men and women. Alcohol has been shown to increase testosterone levels in women, therefore contributing to hormone-based acne.

Alcohol may be aging you.

The combination of dehydration, inflammation and oxidative stress can have an aging effect on your skin. If your skin is in a constant state of dehydration, not only will it appear less plump, supple and radiant, but it will make fine lines and wrinkles more noticeable. Your body’s ability to heal and repair skin on a cellular level can be overcome by a constant barrage of free radicals, making you age faster than you normally would. Even seemingly small consequences, like dark circles under your eyes or the lack of sleep due to nights out can contribute to an older-looking you (lack of sleep is associated with more noticeable fine lines, uneven skin pigmentation and loss of elasticity).

Still want to have your cocktail and drink it, too?

Here are some things you can do to combat the effects of alcohol on your skin.