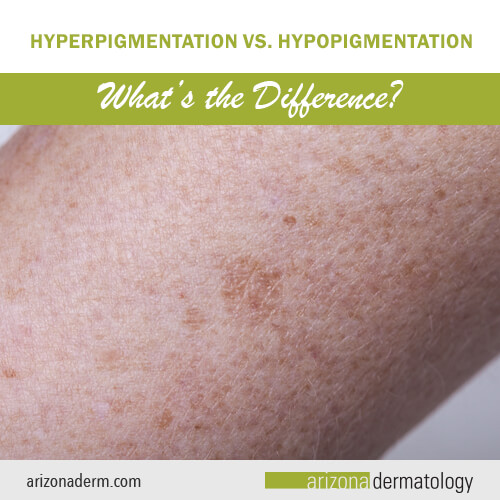 Changes in the color of your skin fall into two categories– hyperpigmentation and hypopigmentation.

A number of things can cause hyperpigmentation, or darkening of the skin. Some of the most common causes are:

Hypopigmentation, or lightening of the skin, can occur for different reasons, some of which include:

Whenever you have lightened areas of skin, it is especially important to use sunscreen and protective clothing to avoid sunburn. Having a dermatologist treat tinea versicolor with antifungal medications will cause the associated skin changes to resolve, although it can take several weeks or months for your skin to completely return to normal.

Treatment for vitiligo is often a combination of medications and laser or light therapy. At Arizona Dermatology, we have had tremendous success with our XTRAC® Excimer laser, which uses a targeted approach to bring back pigmentation to lightened areas of skin while protecting surrounding tissue. We also treat vitiligo with UVB rays in a form of phototherapy. This light-based treatment stimulates melanocytes to produce pigment, helping to return your skin to its natural color.

Any time you have skin changes that concern you, we are here to help! Learn more about all things skin-related in our resource library.