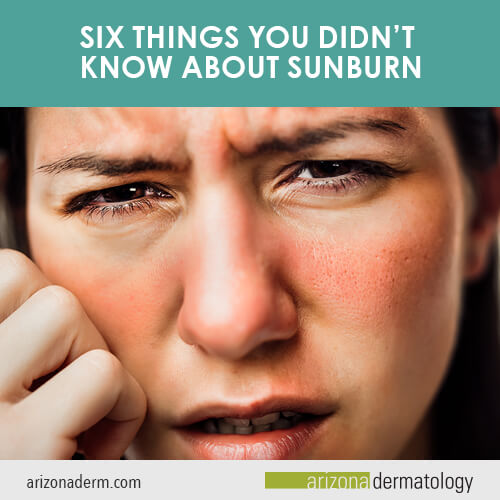 If you’ve heard that sentence before, you have likely been one of the millions of American every year who get sunburn.

Maybe you forgot to put on sunscreen. Maybe you didn’t bother to. Maybe the hours outdoors got away from you or the day was overcast so you didn’t think you needed it (spoiler alert: you can still get a sunburn on a cloudy day). As board-certified dermatologists, we cannot stress enough the importance of protecting yourself from sunburn, no matter your age or skin type.

Let’s take a look at 6 things you might not know about sunburn.

Sunburn isn’t about heat, it’s about ultraviolet exposure. Sunburn is often associated with heat, like the type of burn you might get from touching a hot stove, but you can get a sunburn even on a cold day. That’s because damage from the sun is caused by ultraviolet rays, not heat. Similar to an X-ray machine, the sun bombards us with damaging radiation, and when the amount of exposure is too great, cells die, blood vessels dilate to help bring more blood and immune cells to the area, and the skin becomes red, inflamed, and swollen, sometimes even blistering. In short, you can get a sunburn without even breaking a sweat.

Sunburn can cause permanent cell damage.

Over time, sunburns heal, at least on the surface. The outer layers of skin peel off, and fresh new layers make it look like no permanent harm was done, but that might not be the case. Our bodies are equipped with a number of mechanisms to prevent and correct damage caused by UV exposure, but sometimes surviving cells are left with permanent mutations that the body cannot fix. These cells may eventually become cancerous. Every sunburn you get raises your risk of developing skin cancer, and a single blistering sunburn in childhood or adolescence more than doubles your chances of developing melanoma in your lifetime. Bottom line: the effects of sunburn can be permanent, and early exposure is the most dangerous. That’s why it is especially important to take sun protection for children very seriously.

Sunburn is caused by UVB rays, but too much exposure to UVB rays also means too much exposure to UVA rays, and UVA rays cause premature aging (also called photoaging). UVA rays, with their lower energy levels, penetrate more deeply into layers of the skin, damaging the collagen, elastin and other fibers that give skin its structure, and causing fine lines, wrinkles, and pigmentation changes. Every time you burn, you are aging your skin faster.

Some medications can increase your risk of sunburn.

You should protect your skin every time you are going outside by covering up and using sunscreen, but if you are taking certain medications, you may need to increase your vigilance even more. Many acne medications, including benzoyl peroxide, retinol, and isotretinoin can make you more prone to sunburn. Other photosensitizing medications include doxycycline, sulfonamides, antihistamines, fluoroquinolones, NSAIDs, thiazide diuretics, furosemide, lamotrigine, and isoniazid. Talk to your doctor about any concerns you might have about these medications.

Most sunburns can be treated at home with cool compresses, a gentle moisturizer, lots of water (to combat dehydration) and an NSAID for pain and swelling. However, severe cases of sunburn may require medical attention, especially in children. See a doctor if you or your child has fever or chills accompanied by a blistering sunburn. Also seek medication attention if pain and swelling gets worse instead of better, if pus is present, or if red streaks radiate from a blister as these are signs of infection. We also recommend you avoid post-sunburn gels or lotions containing benzocaine as they can cause allergic reactions. Aloe vera gels are generally considered safe to use on sunburns.

Some people look back on their life and see decades of tanning, golfing, fishing, and days at the beach (complete with the occasional or not-so-occasional sunburn) and assume that the damage has been done and it’s too late to do anything about their risk. This is not true. Sun damage is cumulative, meaning it adds up over your lifetime. Adopting safe sun habits now, including covering up, putting on sunscreen fifteen minutes before going out, and reapplying often, prevents the accumulation of additional sun damage, which could be the difference between developing skin cancer or not.