The Safest Sunscreens for Kids, The Environment, and You 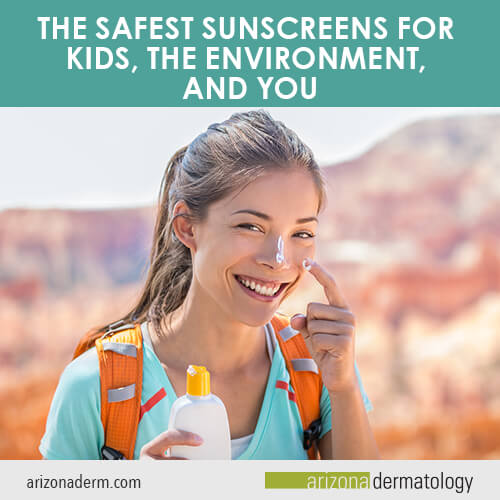 Sunscreen has gotten a bit of a bad rap lately, and as dermatologists that’s concerning to us because skin cancer is the most common cancer and can be deadly. Using sunscreen is one of the best ways to protect against melanoma.

But people are rightly concerned about the chemicals used in sunscreen and how they affect our health and the environment. According to the current science available to us, non-nano physical sunscreens are the safest for both humans and marine life. Let’s dig a little deeper to see why.

Chemical sunscreens protect skin from UV rays by way of a chemical reaction. UV rays react with the molecules of the chemical instead of affecting your skin. Common active ingredients in chemical sunscreens include oxybenzone, octinoxate, octisalate, octocrylene, homosalate and avobenzone.

The chemicals found in chemical sunscreens have generated concerns because they are easily absorbed through the skin into the bloodstream. Questions have been raised about the safety of these chemicals, especially oxybenzone, which some studies have identified as a hormone disruptor. There is also concern about the safety of “spray” sunscreens, as these are easily inhaled when being applied.

Sunscreen safety falls under the umbrella of the U.S. Food and Drug Administration (FDA), but as of yet there has been little safety information available for them to make a determination as to the safety of many of these chemicals. In a 2019 proposed rule, the FDA recognized the sunscreen ingredients zinc oxide and titanium dioxide as “generally recognized as safe and effective” (GRASE). The FDA has recognized two chemical sunscreen ingredients as “not GRASE”: PABA and trolamine salicylate. However, a

determination has not been made on more common chemical sunscreen ingredients, including oxybenzone. The FDA has asked for further information and studies to be done.

Sunscreens and the environment

So which sunscreens are safest for our seas? Based on the science, it is physical sunscreens that are made from non-nano size particles.

Nano and non-nano… what exactly do those prefixes mean? “Nano” and “non-nano” refer to the size of the particles of zinc oxide and titanium dioxide found in physical sunscreens. A nanoparticle is smaller than 100 nanometers (1 billionth of a meter) and a non-nano particle is larger than that.

Due to the unpopular fact that mineral sunscreens don’t disappear entirely when rubbed in, leaving your skin a few shades “whiter” than your normal skin tone, manufacturers began coming up with formulations using smaller particles that absorbed more readily into skin. As a result, nano sunscreens were born.

From a safety perspective when it comes to physical sunscreen, non-nano particles are large enough that they aren’t absorbed into the bloodstream. It is still unclear whether the smaller nanoparticles cross that barrier, and while early research suggests that they don’t, some people feel safer using non-nano sunscreens.

Nanoparticles and the environment

If you recall, nano physical sunscreens were listed as dangerous to marine life, meaning non-nano is the way to go to ensure your choice is environmentally friendly. That said, labels don’t always state whether the mineral sunscreen is nano or non-nano or give you the size of the particles. To be certain you have a non-nano physical sunscreen that is safe for marine life as well as people, look for the words “reef safe.” Some options include All Good Sport Sunscreen, Babo Botanicals, and Thinksport.

The most important thing is to find a sunscreen you feel good about and use it every day. And don’t forget— there are other ways to protect yourself from the sun that don’t involve choosing a sunscreen— cover up with long sleeves and a hat, wear UPF clothing, and/or avoid the peak UV hours of 10am to 4pm.