Warts, Skin Tags or Moles? How to tell the difference. 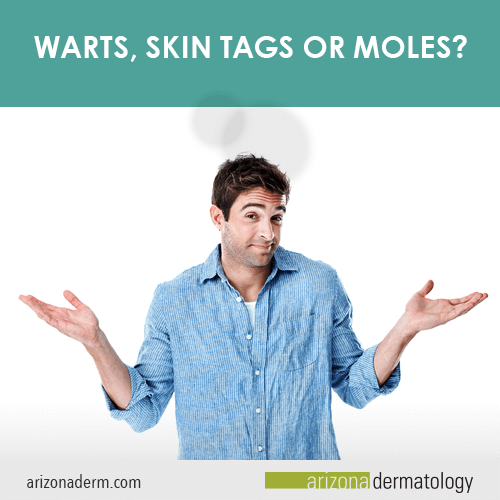 Is that a wart, a skin tag or a mole? Sometimes it’s hard to tell.

Certain skin conditions can look a lot alike, but just because they look similar doesn’t mean they all respond to the same type of treatment— or even require treatment at all. Warts, moles and skin tags can have a very similar appearance, but there are some distinctive features that can help you tell them apart.

Keep in mind, that the best way to stay healthy is to have a dermatologist diagnose or test any unusual or new skin growths to determine exactly what it is.

Warts are highly contagious. If you pick at them or touch them, you may spread them to other people or to other areas of the body, including your face. Over a period of several months, warts can resolve on their own.

Common warts can be anywhere from the size of a pinhead to the size of a pea. If you look closely, you may see black “seeds” in the wart, which are actually tiny blood clots. Left alone, small may warts may continue to grow.

Plantar warts are warts that develop on the bottom of the foot. Because of the pressure of walking on them, these warts grow into the sole of the foot and appear flat, almost like a callus. Sometimes plantar warts appear in clusters, called mosaic warts. Plantar warts may give you the sensation that you are walking with a pebble in your shoe.

Flat warts are smaller than common warts, about 1/8 of an inch in diameter, and grow flatter and smoother than the more common type. Flat warts tend to grow in large numbers, sometimes 20 to 100 at a time, and typically show up on children’s faces, women’s legs or men’s beard area.

Filiform warts sometimes called facial or digitate warts, tend to develop around the lips and eyelids. They grow as long, thin projections of skin that have a spiky appearance. Filiform warts may appear flesh-colored, brown, pink or yellowish.

Genital warts develop on the skin of the genitalia and look like a group of scattered, flesh-colored bumps, or may have a cauliflower-like appearance. They are spread by sexual contact. Genital warts should be treated by a physician and are associated with some types of cancer.

Skin tags appear as fleshy outgrowths of skin most commonly found in areas where the skin experiences friction, for example, the underarms, groin, upper chest, beneath the breasts and the neck. These benign skin tumors can also appear on the eyelids. Skin tags tend to develop in middle-aged or older adults. Studies suggest that people may have a genetic predisposition to developing skin tags.

Skin tags are distinguishable from warts in that they grow on a thin “stalk” or peduncle, although this is not always obvious. They may appear as a “hanging” piece of brownish or flesh-colored skin. Thrombosed skin tags, skin tags whose blood supply has been compromised, may appear red, purple or black. A skin tag that is damaged may become inflamed or bleed, but skin tags generally do not cause pain or discomfort.

Some people aren’t bothered by skin tags at all, although others choose to have them removed by a dermatologist for cosmetic reasons. Often skin tags will fall off on their own. It is not recommended to remove skin tags at home due to the risk of bleeding and infection. A skin tag on the eyelid may need to be removed by an ophthalmologist.

Moles, also called nevi, are a collection of melanocytes, the skin cells that give skin its pigment. Most moles develop during childhood and grow along with the person. Light-skinned people tend to have more moles. It is normal for a person to have between 10 and 40 moles.

While mole changes can be a warning sign of a deadly form of skin cancer called melanoma, the truth is that many healthy moles change in color and appearance over time. Moles may also darken during the teenage years, after exposure to the sun, and during pregnancy. That said, if you have seen any changes in a mole, you should see a dermatologist right away to rule out melanoma.

If you have a new mole develop in adulthood, if you want a mole removed for cosmetic reasons, or if you have any concerns at all about a mole, you should also see a dermatologist immediately.

Acquired mole. This is a mole that appears after you are born. It is normal for a person to have 10 to 40 of these moles, especially if they are light-skinned. A person with 50 or more acquired moles is at higher risk of developing skin cancer.

Spitz nevus. A spitz nevus is a pink, raised, dome-shaped mole that usually develops during the first 20 years of a person’s life. It may contain other colors, such as red, black or brown. Spitz nevi may bleed or ooze. These moles can so very closely resemble melanoma that a dermatologist cannot tell by looking at them.

If you notice a new or suspicious mole, it is paramount that you see a dermatologist immediately for a proper diagnosis.