What are those bumps and where did they come from? 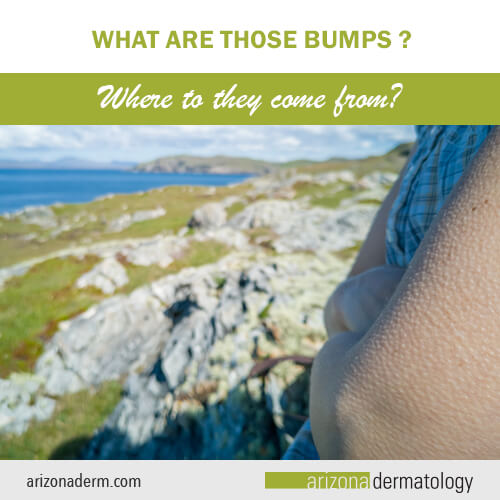 Changes in your skin have appeared out of nowhere! What can it be?

While babies and children are known for developing rashes easily, adults can get phantom break-outs, too. Skin can react to a number of things, including normal aging, and it can be hard to know what those bumps are trying to tell you. Let’s take a look at some common skin rashes and conditions that affect adults.

Skin cancers are the most dangerous skin growths affecting adults. The most common forms are basal cell carcinomas, which can look quite different from one person to another, appearing as red patches, pink growths, open sores, shiny bumps, scars or growths with rolled edges and a central indentation. Squamous cell carcinomas can appear as scaly red patches, wart-like growths, open sores, or raised growths with a central indentation. Melanoma, the most deadly form of skin cancer, often appears as an irregular mole with specific warning signs.

All skin cancers require treatment. If you suspect you have skin cancer, see your dermatologist right away and make regular skin checks part of your disease prevention strategy.

These small, benign tumors look like little red moles and usually start appearing after age thirty. They may be as small as a pinprick or as large as 1/4th of an inch. It’s the blood vessels in them that give them their reddish hue, and they may bleed if scratched or broken. Cherry hemangiomas are most commonly found on the torso, shoulders, arms and legs.

Nothing needs to be done for cherry hemangiomas, but if they are of cosmetic concern, we can remove them. If you notice changes in a hemangioma, have your doctor check it for signs of skin cancer.

Contact dermatitis is an itchy, red, bumpy rash brought about by direct contact with an allergen or irritant. The rash you get from poison ivy is a form of contact dermatitis. Many substances can provoke an allergic reaction in the skin, including soaps, cleaning products, cosmetics, and certain metals in jewelry. Other symptoms include dry, scaly skin, blisters that may ooze and crust, swelling, tenderness or a burning sensation.

Contact dermatitis isn’t dangerous, but it can be uncomfortable. It usually goes away on its own within a few hours to a few weeks and can be treated with cold compresses and over-the-counter anti-itch creams if necessary. If you can identify the irritant or allergen, try to avoid it in the future.

Certain pharmaceutical drugs can cause skin reactions. The most common drug eruptions are exanthematous rashes, which involve small flat or raised lesions on reddened skin and sometimes blisters or pus-filled lesions. The following drugs are known to cause these types of rashes: penicillins, sulfa drugs, anti-seizure drugs, allopurinol, cephalosporins. Medications can also cause hives (see below). The drugs most likely to cause hives are NSAIDs, ACE inhibitors, anesthetics and antibiotics, especially penicillin.

It can take up to two weeks after exposure for a drug rash to develop. They don’t usually have any other symptoms, and the rash will most likely disappear when you stop taking the drug. Tell your prescribing physician right away if you develop a drug rash.

Also called miliaria, this rash can develop in both children and adults and is most common in hot, humid weather. When blocked pores trap perspiration under the skin, small, clear, fluid-filled papules can develop on the upper layer of the skin. When heat rash affects deeper layers of skin, the rash may include red bumps that can itch or feel hot and “prickly” (hence its other name: “prickly heat”).

Heat rash usually resolves on its own by cooling the skin and avoiding further heat exposure. See your doctor if the rash lasts longer than a few days, if the lesions begin to drain pus, or if there is significant pain, swelling, or redness in the area or if fever develops.

The official name for hives is urticaria. They are raised, pale, itchy welts that are often the sign of an allergic reaction. Hives can be caused by pollen, food, animal danger, medications, insect bites or other allergens. Sometimes hives can occur due to stress, exercise, illness, exposure to heat or cold, or from skin irritation from tight clothes or excessive sweating. Rarely, individuals will develop chronic hives with no identifiable cause.

Taking an antihistamine will often cause hives to go away. If hives are accompanied by breathing difficulties, swelling, nausea, vomiting and/or dizziness, it could be a life-threatening allergic reaction called anaphylaxis. Call 911 immediately.

Lichen planus is a condition characterized by shiny red or purple bumps on the skin. It affects the mouth, nails, scalp and genitals as well as the skin. The bumps are firm and may itch or be accompanied by white lines or scales. They most commonly appear on the wrists, arms, back and ankles.

It is unclear why lichen planus develops, but it may be related to an autoimmune disorder, Hepatitis C, a reaction to metal tooth fillings or certain medications. There is no cure, and lichen planus usually goes away on its own within two years. Your dermatologist can help you confirm a diagnosis of lichen planus and manage any bothersome symptoms.

Shingles is a painful rash caused by the varicella-zoster (chicken pox) virus reactivating in your body. It affects mostly older adults or people with weakened immune systems and usually appears as a stripe of blisters wrapping around either the left or right side of the torso. Until the blisters scab over, you are contagious and can pass chicken pox to someone who is not immune to it.

Shingles can be prevented with the shingles vaccine. Most cases of shingles last three to five weeks. Neurological complications can occur, and you should see your doctor if your shingles infection occurs around an eye as it can cause vision loss.

A tiny piece of skin hanging off your body that may or may not have a stalk is called a skin tag. Skin tags are common at midlife and beyond and can appear anywhere, although they often develop where clothing rubs against the skin. They can be skin-colored or darker. They aren’t dangerous, but they can be bothersome or aesthetically problematic.

Skin tags are easily removed at your dermatologist’s office with a quick burst of liquid nitrogen. It isn’t recommended that you try to remove skin tags at home as that can lead to infection. Also, it’s possible to mistake something more serious for a skin tag. Better to leave treatment to your doctor!

This has been an overview of some of the most common bumps and rashes that appear in adults, but the best way to get a proper diagnosis is to make an appointment with one of our dermatologists. Some growths can be skin cancer, which is more easily cured when caught early. If you have odd skin growths and don’t know what they are, come see us. We can help you better understand and care for your skin.