What is Actinic Keratosis and How Do We Treat It? 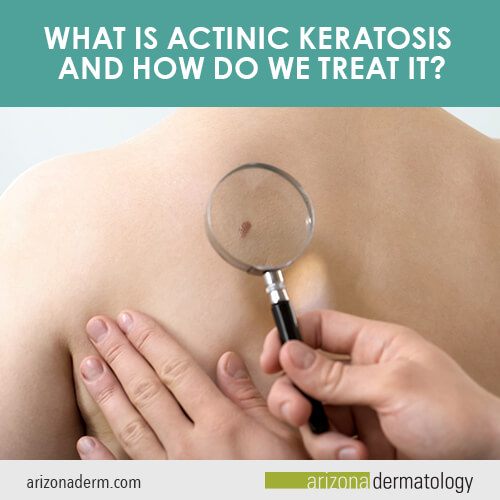 Actinic keratoses (AKs) are a precancer of the skin. Left untreated, they may develop into squamous cell carcinoma, a form of non-melanoma skin cancer. This occurs between 10% to 30% of the time.

How can you recognize actinic keratoses and what can you do about them? Let’s take a closer look.

The Basics of Actinic Keratosis

Actinic keratosis, also called solar keratosis, is caused by UV exposure. Damage by sun exposure or tanning beds builds up over time. Even short term exposure on a regular basis can contribute to the development of AKs, which most often occur in fair-skilled people on sun-exposed areas like the face, lips, ears, scalp, forearms, neck, or the back of the hands. Actinic keratoses on the lips are called actinic cheilitis.

Most patients describe AKs as a scab that doesn’t want to come off or that bleeds when they scratch it. Actinic keratosis can appear differently, however, in different individuals. Some signs of AK include:

What to do if you suspect actinic keratosis

If you are fair-skinned, have red or blond hair and blue or light-colored eyes, have freckles, or if you tend to burn in the sun, you are at risk of developing actinic keratosis. Most people don’t develop AK until after age 40. People who live in sunny climates, like Arizona, or who work outdoors are also at higher risk. Having a weakened immune system is also a risk factor for AK.

Skin growths can be difficult to diagnose on your own. The best way to confirm whether or not a skin change or growth is of concern is to see your dermatologist. With our knowledge and experience we can often tell right away whether something is cancer, precancer, or something else. If we suspect skin cancer, we will biopsy the lesion.

Sometimes actinic keratosis goes away on its own, but it can recur with more sun exposure. It’s hard to tell which AKs will develop into cancer; that’s why we often remove them with a simple procedure in our office.

For numerous or widespread AKs, we might treat them with the following:

All of these treatments are done right in our office and don’t require any downtime. Most AKs can be cured.

You’ve probably already guessed it, but the best way to prevent AK is to protect your skin from the sun! AK is caused by UVA rays, not UVB, so you need to make sure your sunscreen says “broad spectrum” on the label as well as has an SPF of 30 or higher.

UPF clothing, which is specifically designed to block UV rays, is also a great way to protect your skin and help you to avoid having to cover your upper body with sunscreen. Wear a hat with a wide brim as AKs often develop on the face, ears, and scalp.

Some sunscreen products include ingredients that can help reverse sun damage. Isdin Eryfotona Actinica is a mineral sunscreen with an SPF of 50+ that is broad spectrum and includes vitamin E and enzymes known to help repair UV-induced skin damage.

The good news about preventing actinic keratosis is that you’ll be preventing skin cancer at the same time!