Who’s at Risk for Skin Cancer? 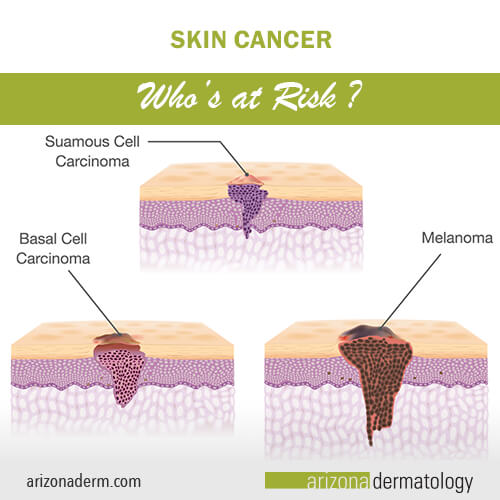 Let’s take a closer look at the facts about skin cancer risk.

Who is most at risk of developing skin cancer?

Light-skinned people. People with a naturally lighter skin tone are more at risk of developing skin cancer because they produce less melanin (the natural skin pigment that protects against sun exposure and gives skin its color). If you have a light skin tone or if your skin burns or freckles easily in the sun, your skin cancer risk goes up. People with blue or green eyes or blond or red hair also fall into this category.

Large number of moles. Most moles will never pose a problem over your lifetime, but individuals with more moles have a greater chance of developing melanoma, a deadly form of skin cancer. We encourage everyone to check their moles regularly for the ABCs of Melanoma, to report any new moles or changes to your dermatologist, and to get skin checks annually.

UV exposure. Ultraviolet rays, specifically UVB rays, are considered the greatest cause of skin cancer. Their wavelength allows them to penetrate deeply into layers of the skin, damaging the DNA inside skin cells. When this damage affects skin cell growth, skin cancer occurs. If you  spend a lot of time in the sun for work or leisure, especially if you live in a sunny climate or have a history of blistering sunburns, your risk is elevated. (In fact, a study by researchers from Brigham and Women’s Hospital and Harvard Medical School found that women who had had five or more blistering sunburns between the ages of 15 and 20 were 80% more likely to develop melanoma than women who had not had any blistering sunburns.) Additionally, if you use (or have used) tanning beds, your exposure to ultraviolet radiation and therefore your risk of skin cancer is increased. The American Academy of Dermatology states, “Just one indoor tanning session can increase the risk of developing skin cancer (melanoma by 20%, squamous cell carcinoma by 67%, and basal cell carcinoma by 29%).”

Older age. The longer your skin has been around, the greater your chance of developing skin cancer, probably due to cumulative sun exposure. According to the American Cancer Society, the average age of a melanoma diagnosis is 65. That said, more and more skin cancers are being diagnosed in younger people. If melanoma runs in your family, you are at risk of developing it at an even younger age.

On top of the most common risk factors mentioned above, there are a handful of more rare situations where skin cancer risk is elevated.

Men get melanoma more often overall than women, but more women under 50 are diagnosed than men. The American Cancer Society estimates that in 2020:

Melanoma is 20 times more common in white people than in the African-American population, but darker-skinned people are often diagnosed later, when the disease is more advanced and therefore dangerous. The American Academy of Dermatology has published a video specifically for people of color about skin cancer risk.

Who is at risk for skin cancer? To repeat our short answer… everyone, but some more than others. The best way to protect yourself is to cover up from the sun, use sunscreen, do skin checks at home, and have a professional skin check annually or as often as your dermatologist recommends. If you are concerned about your skin cancer risk, our board certified dermatologists can help. Book a skin cancer screening today.